Multiple sclerosis (MS) is a neurodegenerative and neuroinflammatory disease of the central nervous system. A large proportion of MS patients suffer from cognitive impairment (CI), where disorganization of the functional brain network plays a vital role. While the dynamic behavior of these networks has not been studied extensively in MS, networks appear "stuck" in particular brain states, with a reduction in overall state dynamics. However, especially little is known about the specific brain states MS patients might become "stuck" in. Therefore, this study aimed to investigate whether CI in MS is related to a reduction in the dynamics of specific states.

Resting-state functional MRI (rs-fMRI) was acquired from 332 patients with MS and 96 matched healthy controls (HCs). Seven cognitive domains were assessed with an expanded Brief Repeatable Battery of Neuropsychological tests, from which cognitive groups were defined (Mild CI, ≥2 tests Z<-1.5; severe CI, ≥2 tests Z<-2; preserved, CP). Physical disability was assessed using the expanded disability status scale. A sliding-window approach was used and for each window functional connectivity (FC) was calculated using Pearson correlations. Subsequently, k-means clustering was performed on all windows to identify recurrent patterns of FC, i.e. brain states. Next, meta-states were computed, which represented the distance to each state and, therewith, the position of the brain in state-space. Meta-state analysis computed how the functional network moves through state-space using the number of meta-state changes, number of meta-states visited, state-span, and total distance travelled. For state-specific alterations, fractional occupancy (FO) described the total time spent in each state, dwell-time (DT) represented the number of consecutive windows spent in each state, and the fraction of switches (FS) from other states to a particular state characterised the accessibility of a state. Linear mixed models were used to quantify differences between groups, cognitive relations focused on Bonferroni-corrected pairwise differences between MS patients with CI and CP. A multivariate regression model was performed in MS with backwards selection to identify which measures of state dynamics explain cognition best, beyond conventional measures of structural damage (atrophy, lesion load, and white-matter integrity). All analyses were corrected for age, sex, and education.

These results indicate that CI in MS is related to a broad reduction in state dynamics of the functional brain network. CI patients showed a lower number of meta-states as well as more time spend in a specific state where brain regions mostly communicate to other regions within the same network. These regions communicate less with brain regions from other networks, which could hamper the global integration of information. In addition, time spent in this particular state related to cognition, even after correcting for structural damage, indicating the added clinical value of such network parameters. Although these results show that CI patients are especially "stuck" in a state of within-network communication, future work should elucidate whether these networks reduce their own dynamics or whether dynamics are directly restricted by pathology. 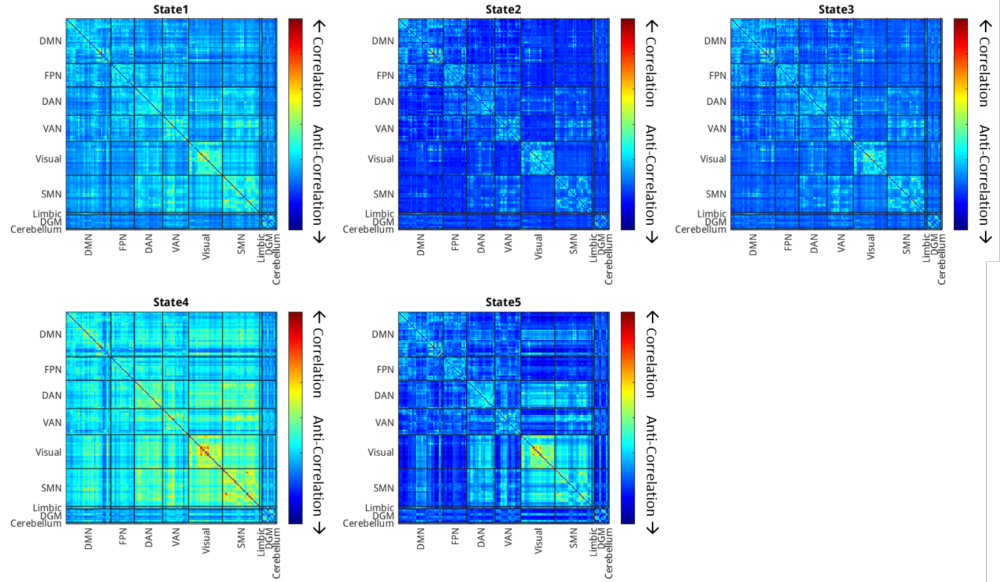 ·Fig 1. Connectivity matrices of the five states based on all participants. 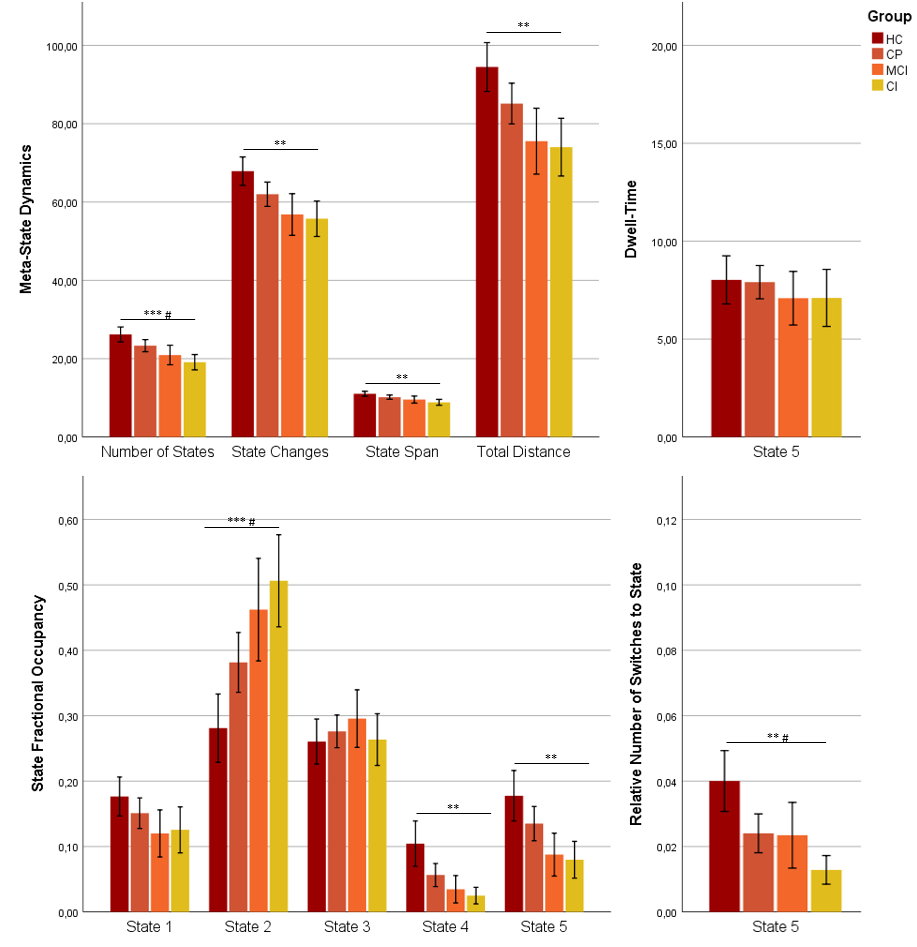