In recent years, the field of neuroscience has shifted towards a network view of the brain, and it is understood that cognitive processes like executive functioning (EF) are dependent on a network organization that facilitates both segregation and integration (Watts 1998). This organization tends to become more efficient during development, after which it regresses to less optimal topologies in later life (Hwang 2013; Onoda 2013). Brain regions that are highly central within the network, also called hubs, seem crucial in facilitating network integration (Bertolero 2013). The frontoparietal network (FPN) contains many such hubs and has been shown to play an essential role in EF (Marek 2018). However, brain networks can be constructed using different modalities: diffusion MRI (dMRI) can be used to obtain structural networks, while resting-state fMRI (rsfMRI) and EEG/MEG yield functional networks. These networks are often studied in isolation, but give complementary information that should perhaps be considered simultaneously (Garcés 2016). Multilayer network analysis allows for integration of different modalities into one 'network of networks' (Boccaletti 2014). This representation may contribute to a better understanding of the brain, but the relation between multilayer network properties and healthy cognition and aging has not yet been investigated. We thus hypothesize that individual differences in multilayer network centrality of the FPN explains more variance in EF than monolayer centralities of the FPN.

We obtained dMRI, rsfMRI, MEG, and neuropsychological assessments in 33 healthy volunteers (55% female, age 20-70 years). EF was defined by averaging age- and education-corrected z-scores of animal fluency, Stroop (interference condition), and concept shifting tests. All imaging data were registered to a 3DT1-weighted image and parcellated according to the Brainnetome atlas. We performed probabilistic anatomically-constrained tractography in MRtrix3 to construct weighted structural networks from the dMRI data. Pre-processing of the rsfMRI and MEG data was performed as described previously (Nissen 2017; Tijhuis 2020). To obtain weighted functional networks, we calculated Pearson correlations between rsfMRI time-series and the phase lag index between all pairs of regions in six MEG frequency bands (delta-gamma). We then constructed the minimum spanning tree (MST) of all networks. We used weighted dMRI and rsfMRI networks and MEG MSTs for the monolayer analyses, and integrated the MSTs of all modalities to construct multiplex networks. The weights of all interlayer links were set to 1 (Fig. 1). Finally, we computed nodal eigenvector centrality and averaged the centralities of the FPN nodes. We used hierarchical multiple regression to explore the added value of multilayer centrality over monolayer FPN centralities in explaining EF. Additionally, we used hierarchical multiple regression to assess the relation between healthy aging and multilayer FPN centrality. 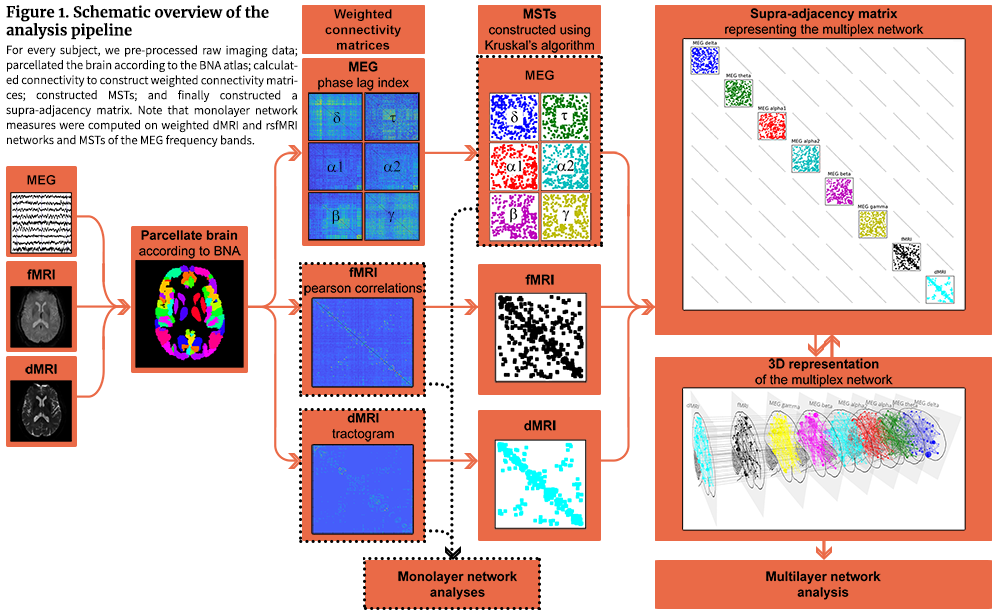