Posterior cortical atrophy (PCA) is a rare variant of Alzheimer's disease (AD) where degeneration begins in the occipital lobe rather than the hippocampus/temporal lobe [Crutch2016]. Recent work has found MRI-visible breakdown of cortical lamination in AD neurodegeneration [Kenkuis2019]. We scanned post mortem samples of PCA, AD, and control tissue with quantitative MRI metrics (R1, R2*, mean diffusivity (MD), mean kurtosis (MK), and fractional anisotropy (FA)) sensitive to cortical microstructure [Edwards2018] to investigate whether similar cortical changes occur in PCA and whether these changes qualitatively differ from those in AD. With this we aim to inform in vivo applications.

MPMs were registered to DWI space. Initial GM/WM masks were estimated by thresholding and k-means clustering of the PDw echoes. Gross errors in the masks were manually corrected (by LJE).

Cortex was segmented into 20 equivolume layers in Nighres (https://github.com/nighres/nighres). Visual inspection of the V images showed the stria of Gennari (layer IVb) was mostly found in layers 8–13. We thus binned each parameter into layers 2–7 (lower), 8–13 (mid), and 14–19 (upper) so "mid" approximates layer IV. Areas showing artefacts were manually masked out (by LJE) before binning.

For histology, tissue blocks were paraffin-embedded, cut into 8 µm sections, and processed, alternating Nissl stain and immunohistochemistry for myelin basic protein (MBP) and Aβ deposits. Microscope images were recorded on a Zeiss Axioscan Z1. Layers I–III (upper), IV (mid), and V–VI (lower) were manually segmented (by CJ) on Nissl sections, projected onto the nearest MBP and Aβ sections, and used to bin the average optical density.

Box plots for all metrics were plotted in Matlab.

Fig. 2 suggests that multimodal combination of regional differences in R2*, MD, and FA profiles could differentiate between AD and PCA. This differentiation could reflect differences in Aβ, myelin, or iron distribution, but could also reflect minor differences in tissue preparation. Quantitative iron measurements and in vivo experiments will allow further investigation. 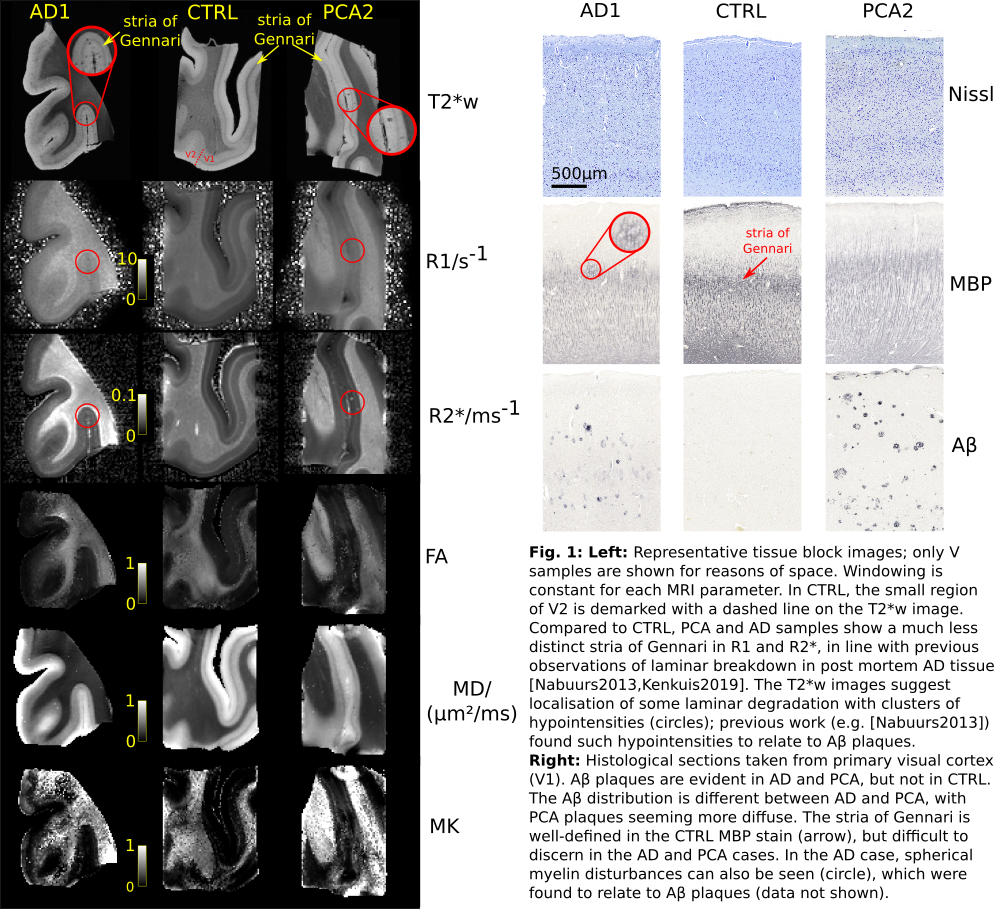 We have shown that AD cortical lamination disturbances previously seen in R2* [Nabuurs2013] can be seen in other quantitative maps and in PCA. Observed differences in MRI contrast between PCA and AD may reflect their different progression, but the small number of samples calls for caution when extrapolating the results.