Columns and layers are fundamental organizational units of the brain. Well known examples of cortical columns are the ocular dominance columns (ODCs) in primary visual cortex and the column-like stripe-based arrangement in the second visual area V2 (Hubel & Wiesel, 1977; Mountcastle, 1997).
The spatial scale of columns and layers is beyond the reach of conventional neuroimaging, but the advent of high field magnetic resonance imaging (MRI) scanners (UHF, 7 Tesla and above) has opened the possibility to acquire data at this spatial scale, in-vivo and non-invasively in humans (Chaimow et al., 2018).
The most prominent non-invasive technique to study brain function is blood oxygen level dependent (BOLD) fMRI, which measures brain activity indirectly via the changes in hemodynamics. One of the key determinants in assessing the ability of high-resolution BOLD fMRI to resolve cortical columns and layers is the point-spread function (PSF) of the BOLD response which related to the spatial extent of neuronal activity.
In this study we take advantage of the stripe-based arrangement present in visual area V2 (Dumoulin et al., 2017), coupled with sub-millimetre anatomical and gradient-echo BOLD (GE BOLD) acquisition at 7T to obtain PSF estimates along cortical depth in human participants.

Stimuli were generated using Matlab. The contrast polarity reversed at a temporal frequency of either 1.5 or 7.5 Hz, alternated in a block design of 13s/block (Figure 1).

We observed a positive linear relation between the full-width-half-max (FWHM, PSF) estimated from the GE-BOLD data and normalized cortical depth at the single participant level as well as across all participants (Figure 2).
Portions of cortex closer to the white matter boundary were characterized by a PSF of approximately ~0.8mm, compared to estimates from locations closer to the cerebro-spinal fluid surface, yielding PSF estimates of approximately ~1.8mm (Figure 2).

We postulate that GE BOLD measurements can resolve the underlying neuronal spatial organization with an accuracy below 1mm deeper in the cortex with this spatial specificity degrading closer to the pial surface. Our results provide an estimate of functional PSFs along cortical depth in human participants, useful for studies aimed at probing fine-scale cortical organizations in human neocortex. 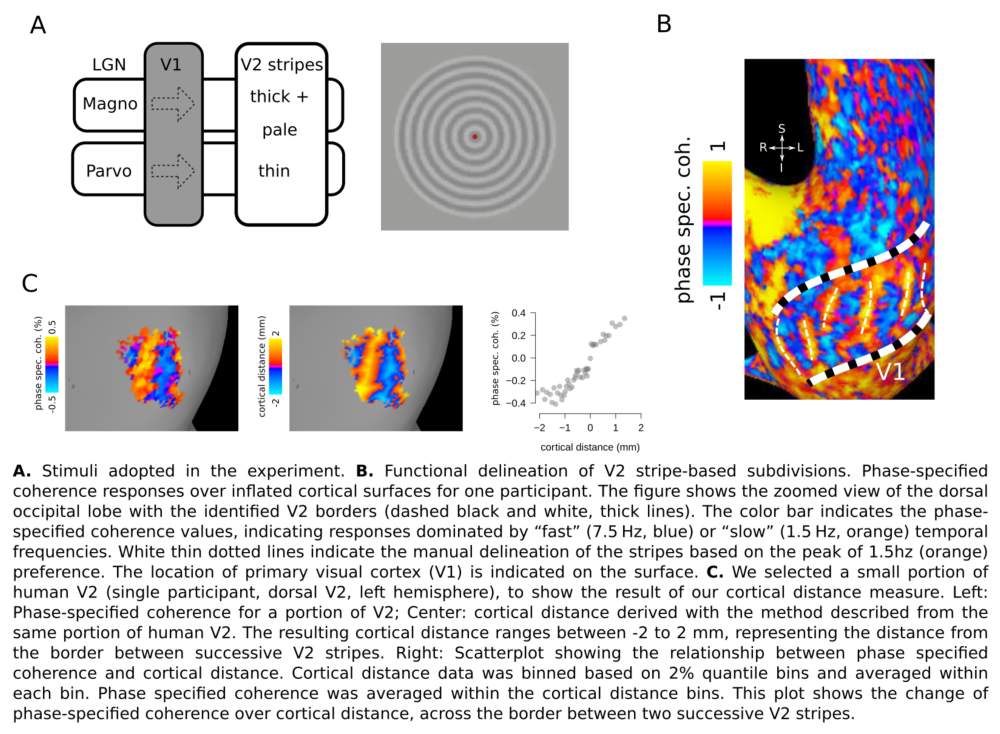