Orientation gratings induced significant cerebral blood volume response across the visual cortex (500 μm cortical depth in Area 18, -1.0 to -6.0% signal change) (Fig. 1A). The outcome of orientation tuning curve fitting showed the characteristic spatial pattern of the iso-orientation domain (Fig. 1B); the Poincaré-Hopf index calculation and Voronoi tessellation revealed the location of pinwheel centers and the extent of the pinwheel ('Hyper-column') (Fig 1C. and Fig. 1D). The spatial pattern varied upon the cortical depth; the across-cortex spacing of pinwheel centers was 0.83±0.5 mm across all layers (Fig. 2A), but notably, the spacing gets linearly larger as cortical depth growing (r = 0.9, R-square = 0.87, p < 0.05) as well as the extent of pinwheel domain gets broader as cortical depth growing (Fig. 2B), which shows the similar linear trend with the pinwheel spacing (r = 0.64~0.89, p < 0.5). 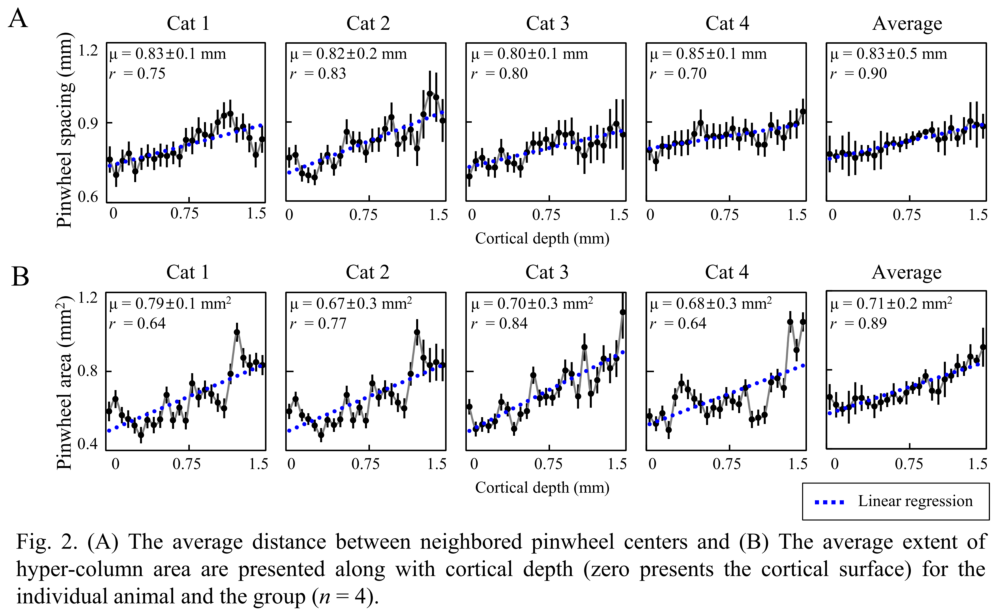 Are you Internal Review Board (IRB) certified? Please note: Failure to have IRB, if applicable will lead to automatic rejection of abstract.